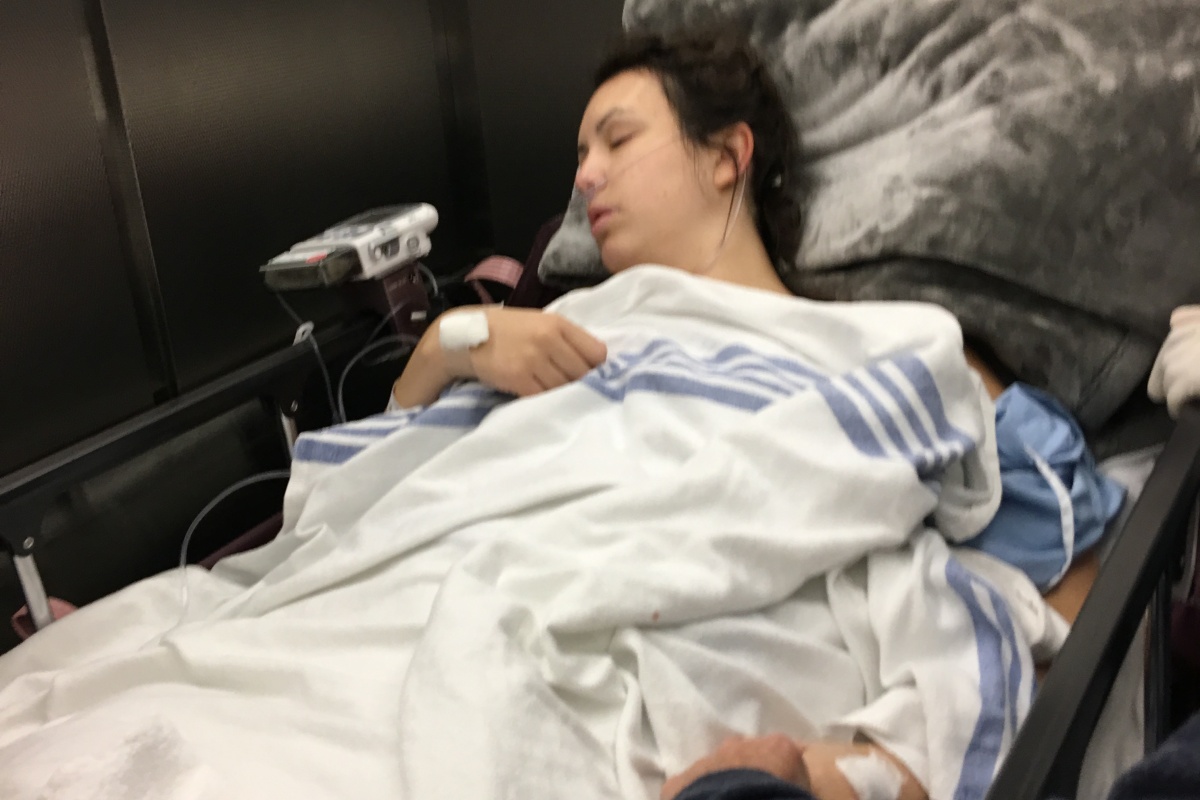 No one told me to prepare for the worst week of my life.

Assuming that I am much healthier, more nourished and better rested than last year, I went into this surgery thinking I am ready. I am strong. Nothing could be worse than last year…

I went into surgery around 9:30a.m. and by the afternoon I was HIGH on Dilaudid (a pain killer stronger than morphine) and groggy from anesthetic. I giggled and took silly snap chats with my family and even confessed to my Dad about having a tattoo on my ass….which in turn lead to hysterics for my Mom, sister and Travis. We were having so much fun that although I can’t remember much, I specifically remember thinking to myself, “This is the best day ever!” 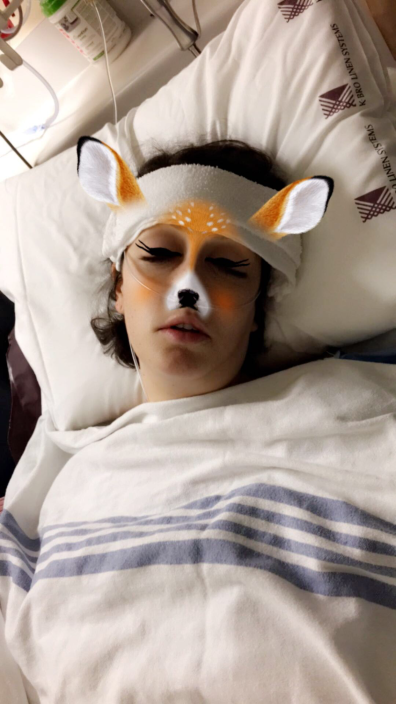 I was given Dilaudid through an IV on a pain pump that I was able to use at my leisure every 5 minutes. And trust me when I say I DID. My family and person came for a visit and although I felt their love and support, I also felt the pain setting in. While trying to hold a conversation with my sister and Sara, I felt a wave of nausea. Good thing for sisters, because there she was holding a bucket while I puked up bile. If you have never vomited the day after abdominal surgery, I can assure you it’s excruciating.

This day started out with a lot of visitors, and as fortunate as I felt, the first thing that came out of my mouth when they walked in was, “Oh God. I am not in a good place.”

I really was supposed to get up and start walking as soon as possible, but since it was NOT happening on Day 2, Day 3 was a must. My bowels had not “woken up” yet and I was experiencing a symptom called ileus, meaning they just weren’t moving. I was encouraged to start walking so the doctors could start seeing some gas and bile movement. Willing to try walking again, I pushed myself to the edge of my bed and with my mom on one arm and my nurse on the other, I vomited again. And that was enough of that.

A new nurse encouraged me to try walking again. And after a night full of restlessness and anxiety, my first mental breakdown occurred on Day 4 at the thought of having to get up. The only thought running through my mind from the evening before was, “How the hell am I ever going to get out of this bed?” And by the morning the tears poured out knowing that I must try, but I didn’t want to. I also had a urinary catheter in, a JP drain in my abdomen, and a new ostomy, as well as my IV, making it quite uncomfortable to move around with tubes coming out of me every which way.

I also asked the pain team if they could take me off the Dilaudid because I knew it was making me instantly sleepy and difficult to focus on anything. My surgical team told me that because the bowels hadn’t woken up yet, there was gas and fluid build up and that’s why I was so uncomfortable. With that in mind, a new, extremely encouraging nurse, and my aunt behind me, I tried to walk again. Surprisingly I was able to take a walk down the hall, give myself a wash, brush my teeth, change into a new gown and wait while my nurse changed my sheets. I felt refreshed, but nausea was starting to set in again, so that was enough.

Later that day I was told my urinary catheter could come out. But in doing so, it meant I had to get up to pee now. I agreed but wasn’t looking forward to that.

By this day, my bowels had woken up, I was taken off the IV and I was beginning to have output. I was under the impression that I would be able to go home on Day 5, but boy was I wrong. My output was quite watery, and I was only just now being re-introduced to normal foods. The surgical team suggested another day to see how things normalize. But things just kept pouring out. I asked the surgeon if I promised to drink a lot of water could I go home tomorrow, and she said she would consult with her team. After discussion, they figured that because of the swelling, I had a small obstruction, and only liquid was able to pass, and they should keep me, until the swelling to goes down.

My stoma nurse came by and said the actual stoma was looking good, besides the swelling. Because it’s a loop ileostomy, I had a plastic rod sticking through it, which was supporting it from going back into my stomach. By this day, the stoma was ready to stand alone, and we took the plastic rod out. 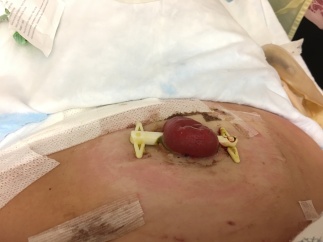 I also started to recognize that the pain I was experiencing was becoming more associated with each time the stoma became active. With every bowel movement, I experienced an intense cramping and painful aches while my faucet turned on.

Day 6 was also the day I experienced the most horrendous 4 seconds of my life. Now you might think I’m exaggerating but to me, this was absolutely true. My nurse came in to take out my JP tube. Thinking it would be a simple, quick pull like the catheter, I figured no problem. She told me it wouldn’t hurt, but I would feel it. And I FELT it. While I stared at the ceiling, cringing, gasping and squirming, she two-handed pulled out this long tube from my insides. Once it was done, the tears POURED. And they didn’t stop for the next half hour while I tried to grasp what just happened. Painful? No. Uncomfortable? Understatement. Absolutely heinous? Yes.

I went to sleep from Day 6 thinking I could hold off for another IV session until the morning. But after waking up almost every hour to empty my ostomy pouch, by 3am I was not in a good place. I buzzed my nurse and asked to be put back onto the IV fluids in order to help my sleep. I also had managed during the day without any pain pills but I required one to sleep. Waking up on Day 7 I felt nauseous and just sick.

My dietician came for a visit and he agreed that even if I was drinking 4L of water a day, there would be no way I could possibly keep up with that kind of output. Before the team decides to put an NG tube through my nose, or gives me anymore medication, he’d like to try to correct the output with diet. And that required potato chips. With every meal, and snack, and small bag of Lays Potato Chips was sent to my room. He figured that the sodium and potassium was what I would need and encouraged me to snack away. I was also encouraged to just stick to white breads, and easy to digest foods. 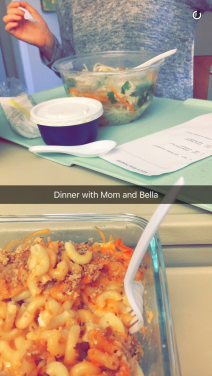 The surgical team came by and suggested putting in a catheter into the stoma to try and by-pass the blockage. A couple of hours later, there was less output, but still liquid, so the surgeon pulled it right back out. My faucet continued however not as frequently so I thought maybe I was starting to see the light. Maybe the chips were working.

Unfortunately the pain continued, and it was even getting worse. I was now experiencing the cramps, even without a bowel movement and they were intense. My nurse made me a little concoction of pain meds and anti-nausea, which put me into a very high/dopey state for 3 hours. I had her promise to pass on the directions to the night nurse incase I needed them again. Which I definitely did…

The night from Day 7 to Day 8 was possibly the most painful. I attempted my hardest to stay up until about 10:30 so I could get the best use out of my drug cocktail. Sure enough I had the most relaxing sleep until about 1:30am. The pain and nausea was coming back with a vengeance and I knew it wasn’t time for another dose. I somehow was able to wait it out until about 3:00am which is when I decided to ask for another pain/anti-nausea infusion. By the time I buzzed my nurse and she hooked it up, I was vomiting in a bucket. Luckily the drugs don’t take long to kick in and I was knocked out soon after until about 6:30 a.m.

Now here’s where it gets interesting. My surgical team came by at 6:30am and I told them how bad the night was. Even though the output was not as high, the pain was. They stuck to their theory that it was a bowel obstruction and we’d have to see how the weekend goes before issuing a CT scan and potentially an NG tube. Just out of curiosity I asked if it was ever possible for someone like me to get C-Diff. They said things like, “No your blood work doesn’t show any signs of infection,” or “That’s not likely for someone without a large bowel,” or “No your symptoms don’t really present like C-Diff.” To which I responded, “Could you just test me anyways?”

I sure enough tested positive for C-Difficile. A lady from the infection disease control came by and was curious because in someone with a bowel disease, it’s difficult to measure a baseline for C-Diff symptoms. She asked how I knew and I explained that the cramping was similar to when I had it last year, and I just thought it was worth asking about. After 3 days of antibiotics and isolation (Days 9,10 & 11) my output began to slow, cramping eased up and we started using Metamucil as a bulking agent. I am no longer on pain meds and my only job now is to finish the antibiotics and rest. I was released at 6:00 pm October 3rd and with the help of my sister, surprised Mom and Dad by coming home a night early.

3 thoughts on “The First Week After Pelvic Pouch Surgery”