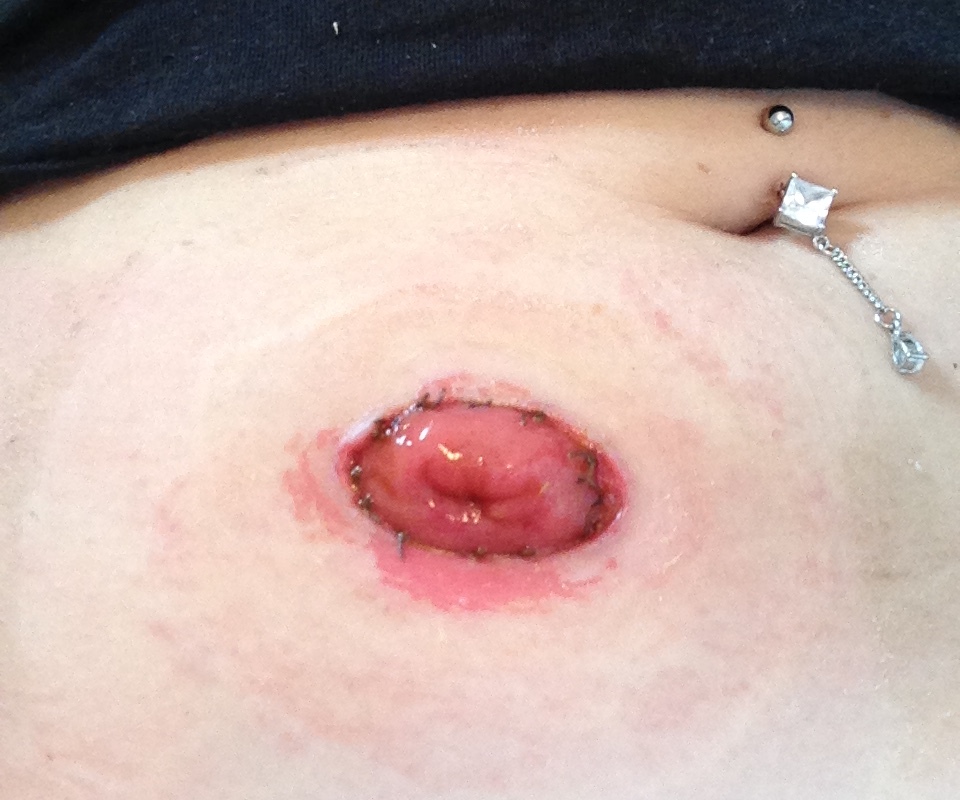 Last week was my first week back in the real world and what a challenge it has been. I couldn’t stand sitting at home any longer and felt like my lazy ass needed to start being productive again. After an optimistic meeting with my boss I decided to start back at work Monday morning with enthusiasm and energy. But to be honest I have only been plagued with bag issues.

So here’s a brief update on my recovery process leading up to this week. First of all my surgeon was concerned about the amount of pain I was still in 11 day post surgery so I had an ultrasound done. At my follow up appointment with her she determined that the pain was just from some small inflammation that was still present in my body, especially since the rectum was left in and was still being affected by the disease.

I also received the results of my pathology which came back CLEAR and a true diagnosis of Ulcerative Colitis meaning I am now definitely eligible for the next surgery. (YAAAAYY!!) …..

I also touched base with her regarding the skin under my belly button and how it is still numb. She basically said “Yeah that happens” and that I may eventually have feeling returned….(uuh okay?)

Next, through trial and error, very irritated skin and more than a couple of leaks, I think we have finally found the combination of products that work for my appliance and I. I had been using the Hollister appliances with a combination of Eakin barrier rings which seemed to do the trick just fine. I’ve been using the 2-part piece from Hollister but after I sent away for free samples from Coloplast I figured I’d give those a try. After a BAD reaction to the combination of the Coloplast flange and Hollister barrier ring, my home care nurse decided to send a Wound Specialist nurse to treat the severe irritation. And this is how the week began on Monday…..

“Try it without a barrier ring,” he said…..”You should be fine with just the flange,” he said…. “ I don’t think I need to order you any Eakin rings,” he said…..SUUUUUREEE!

12 hours later I wake up in the middle of the night with a leak and no rings to put on. So left to my own devices at 1:30 am I quickly had to put on bag #2 of the week, without a ring again. By the morning I have so much anxiety about this leaking that I just decided to take it upon myself to buy the Eakin rings from Shoppers Home Health Care. I figured though I’d wait until I absolutely needed to change for cost saving reasons, before putting one on….which quickly became Tuesday afternoon

Then, little to my knowledge the clips used to hold the bottom of the bag together apparently also go through wear and tear. I was told to save these and reuse them, so I barely even checked to make sure the same one I have used since the hospital was still secure. Whelp I found out the hard way that leaks don’t always happen from the top. I wont go in to too many details in an effort to spare you the horror (and also me, the queen of openness and honesty who isn’t even secure enough to share this atrocity), but let’s just say that I was quite disappointed the surgery done to ensure I didn’t shit my pants anymore, had just backfired.

I still felt confident that my most recent appliance, accompanied by the Eakin barrier ring (AND Coloplast half-moon tape used for extra adhesiveness), was secure, fastened and leak proof. So out I went for Tuesday night half price wings…..

Now because of all the dietary changes I am only able to eat mini-sized portions so I really didn’t eat my meal on Tuesday night. But I did save it for Wednesday lunch when I was starving and unable to control my impulses to eat all of my leftovers with a ginger ale…..And QUE the next issue….

Wednesday night I was troubled with a lot of gas and gurgling into the bag. The stoma was very loud and active. I continuously had to relieve the air building up as well as frequently emptying it with very liquid output. I figured it was just from the carbonated drinks and luckily I was in the comfort of my own home where Bart (the bag that farts) is free to do whatever it wants. But then I went to bed…. And by 1:00am woke up to a BALLOON bag. It was completely inflated with air. As soon as I sat up I heard, “PFFFFFFFT” and all the air escaped through the side causing a leak.

So here goes my fourth bag change of the week in the middle of the night. So in order to put a new appliance on I need to clean and dry the skin around the stoma. Unfortunately the liquid output was very active and did not stop….for an HOUR. I sat in the washroom constantly wiping my skin for 60 minutes. 1:00am to 2:00am. Talk about pajama drama.

So after an hour I decided I need to put something on because I couldn’t keep sitting on the toilet with a waterfall of liquid pouring out from my stomach. Knowing the flange would likely not stick because the skin was still damp and irritated I used the Hollister paste in an effort to not waste an Eakin ring. This seemed to get me through the night and I contacted my nurse as soon as I woke up. I decided it was probably safer to take the day off incase of a leak and so that I could meet with my nurse as soon as she was available. By 10:30 she was here (bless her) and we changed the whole thing again…for the fifth time this week.

By that evening the output was not slowing down, the gas was excessive and LOUD and we decided that this is not normal, dehydration is likely a threat and something must be wrong, A quick trip to emerge provided some hope with Codeine pills in an effort to slow down the effort. This did nothing and in hopes of avoiding another balloon explosion I set an alarm to wake up every hour during the night to release gas and empty the liquid.

First thing Friday morning I went to the grocery store and bought a giant bag of marshmallows. As I walked into work ready for a full 7.5 shift without a split I was really nervous and anxious. LUCKILY the marshmallows worked!! (Somewhat) normal output.

Things started to thicken up and I was able to keep this current bag on until Saturday.

When I had to change Saturday evening I noticed the shape of my stoma was changing. It seemed as though the opening was now facing a downward angle and although the marshmallows work during the day, the liquid and gas seem to start up all over again during the night. Because of this new shape the liquid automatically seeps downwards and under the Eakin ring. I was having the same issues Sunday morning and my skin was absolutely BURT. My tummy has such a rash and irritation that it looks like it’s been burned. I texted my nurse a picture and her response…..”Oh my god.”

Thankfully I was able to clean the skin as best as I could, warm up the Eakin ring to help with adhesiveness, and stuff my face with enough marshmallows that I finished off the week with my 6th bag and feeling confident enough to go to work tomorrow. My nurse is going to come first thing and we’re going to come up with a new action plan. I can’t imagine anything going too much worse than this past week but stay tuned…… 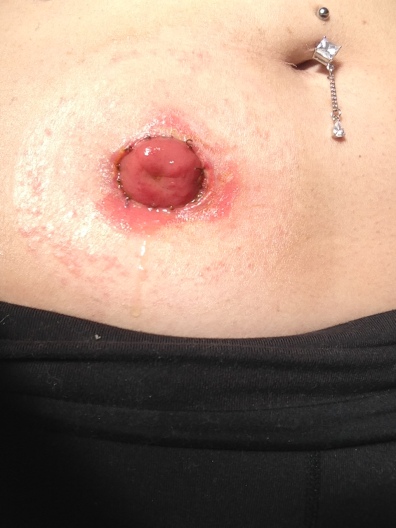 Irritation began to heal but having difficulty with appliances staying on, leak free

A lot of liquid output, seeping onto my skin BURNING it