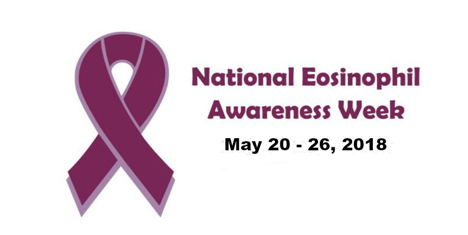 About a year and a half ago I posted an article written my best friend, Sara to shed some light on her baggage dealing with Eosinophilic Esophagitis. Although we don’t have similar symptoms, we both face an autoimmune disease attacking our digestive tract, and we both know the anxiety of facing the real world when people are unaware. SO here is a follow up to her first post about real life challenges (and in my opinion real life resilience, perseverance, and bravery). Sara has been nothing but supportive for me and is the epitome of compassion and grace. Please, read her story with an open mind and show empathy for anyone who is struggling.

” In honour of the upcoming National Eosinophil Awareness Week, I thought I would once again share a few personal stories regarding my rare autoimmune disease. I had written a blog post in the past where I outlined the definition and basics of my diagnosis and disease, Eosinophilic Esophagitis, or EoE. This time around, I thought I would discuss some of my day-to-day life and struggles with EoE.

To start off, I want to acknowledge how blessed I am to have been diagnosed with EoE over 12 years ago by an understanding and educated gastroenterologist. I am well aware how lucky I am that I have never needed invasive surgery, or a feeding tube which many sufferers of EoE have had to resort to. I am also very lucky that I did not have awful EoE when I was an infant or a child. My heart goes out to all the babies, children, and parents of kids with EoE.

That being said, EoE still affects my life on a daily, if not hourly, basis. I have tried to explain to others my mindset about eating a family meal together, sharing a meal at a restaurant, or simply having to eat a meal in front of coworkers, my students, family or friends. Throughout the years I have had plenty of embarrassing experiences. I learned that when I go out to eat, I should situate myself close to the bathroom. Prior to sitting down for a meal, I visually or verbally check to notice where the nearest washroom is and plan my exit strategy. I often look for exit doors and try to notice if the washroom only allows one person at a time. I have had to go outside to vomit countless times, and often find it less embarrassing than others hearing me vomit in a public bathroom. I also learned to carry items like sanitizer, wet wipes and tissues with me in case I am not close to a washroom. 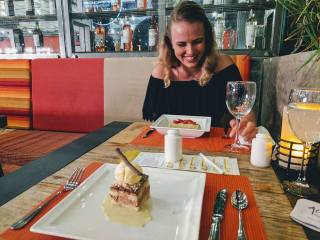 Here are just a few of my unpleasant experiences caused by EoE:

1.) High School: I got home from school and was eating an early dinner before heading to my part-time job at the mall. I ate a bowl of pasta, stood up, and with no rhyme or reason, vomited my entire meal up on the table directly beside my parents who were also eating. My meal looked almost the exact same as it did before I ate it, except it was covered in a thick mucous slime. My mom offered support and held it together like a champ. My dad, who has a weaker stomach, began gagging and had to run to the washroom.

2.) Meet the Parents: The first time meeting my husband’s parents (my boyfriend at the time), we went for dinner on their boat and ate on the dock. His dad cooked BBQ chicken, which I didn’t know at the time was a trigger food of mine. About three bites into my dinner, I felt my food get stuck and I knew I was going to vomit. With no bathroom near me, and nowhere to hide, I ducked beside a car and began shoving my finger down my throat to release the impacted food. While doing this, I often burp loudly as air has been trapped in my esophagus and needs to be released before I can vomit. I was absolutely mortified.

3.) Restaurant: I was eating sushi with a friend when I felt rice become impacted in my esophagus. I made my way to the bathroom, locked the stall, and took off excess layers of clothing. I began sticking my finger down my throat to release the food stuck, and began vomiting loudly. I flushed the toilet and went to wash my hands with teary, swollen eyes, when I realized two other girls were in the bathroom as well. They walked into their stalls and continued talking while I assume they thought I had left. They said something along the lines of “Whether you have the flu or an eating disorder, why would you be at a restaurant vomiting? That’s disgusting.” I wish they hadn’t, but those words have stuck with me.

4.) My First Panic Attack: I was at my sister-in-laws house for Christmas Eve this past December. There were around 20 people gathered around a table with extra chairs to fit everyone. I had been situated about 5 chairs into the room, and for some reason I hadn’t thought through any exit strategy. I began eating my dinner and felt food get stuck in the first few bites. I stood up and had to ask four people to move their chairs in to let me out. This process took longer than normal and I felt panic immediately beginning to set in. I visualized myself having projectile vomit in the middle of Christmas dinner, which wouldn’t be the first time. I looked down at my hands and they began to tremble as my eyes filled with tears. The washroom door was closed and locked and I started crying uncontrollably. I made my way down the hall and found an empty bathroom with vomit in my hands and mouth. I continued vomiting while beating myself up about why I hadn’t sat in a chair on the end, I wasn’t closest to the washroom, I wasn’t aware if the washroom was full and I didn’t plan my exit. It was the first time that I was entirely incapable of calming myself down and I couldn’t catch my breath. My husband and his family were completely supportive and accommodating. However, I was mortified that I was so close to aggressively projectile vomiting in the middle of Christmas dinner.

While none of these are my finest moments, they all contribute to how I deal with my EoE on a daily basis. Over the years, I have become more anxious about having to excuse myself during meals. I worry before, during and after almost every meal that I eat when I’m not alone. Although I have a strategy, it doesn’t always work, and I’m still fine tuning it.

If you take anything away from reading this I hope that it is simply that everyone has a struggle they are battling. It would be so kind if we all kept our judgement to ourselves, and perhaps opened up a conversation about each other’s struggles, no matter what they may be.”